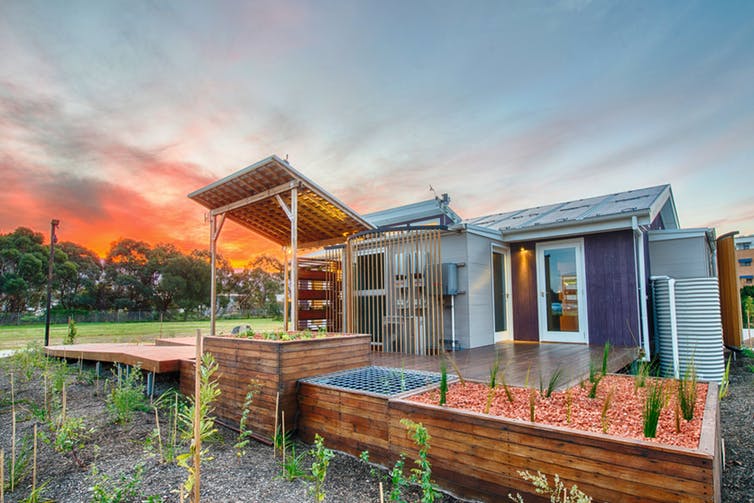 The University of Wollongong Illawarra Flame House demonstrates how a typical Aussie fibro home can be transformed into a net-zero-energy sustainable home. Dee Kramer, Author provided.

Homes with higher energy ratings could sell for more. Here's how Australian owners could cash in.

An energy performance rating is one way to show how “energy hungry” a home could be. In many countries, it is mandatory for the seller to obtain and disclose a home’s rating. For European Union countries, this has been the case for ten years.

But that’s not the case in most of Australia. Only one of the states and territories – the ACT – has a regulated scheme to disclose the energy-efficiency rating of housing to prospective buyers.

Disclosing energy ratings is standard practice in the commercial building sector in Australia. Previous research showed this increases the value of buildings with higher energy ratings (a price premium). Our recent review of international research looked to see if a similar effect exists in the residential sector.

What does the research show?

The majority (23) of the 27 relevant studies we reviewed found more energy-efficient homes fetch higher prices than less energy-efficient, but otherwise comparable, homes. So what sort of price premium do houses with a higher energy rating attract? It’s typically around 5% to 10%.

Price effects were considered in two ways. The first involved comparing rated versus unrated residences. The second compared higher-rated residences with lower-rated ones. In both cases, a price premium was found to exist.

Obviously, it isn’t just the energy rating of a house that affects its price. Location, size, age and other relevant features of a property influence the final price. Researchers use a statistical method, called hedonic regression, to estimate the effects of all these factors. A home energy rating was included as one of these factors.

The studies we reviewed were published between 2011 and 2019, covering 14 countries and ten energy performance rating schemes. Most of the studies (18) considered the European Union’s Energy Performance Certificate (EPC). Although there are differences in how each EU country defines and manages these certificates, they are broadly comparable, in that they use a standard A (high) to G (low) grade.

Example of a displayed Energy Performance Certificate from the UK, with an A to G rating. The certificate include details on how to improve the rating and indicates the potential rating if all upgrades were completed.

How would this system benefit Australia?

This system would obviously be good for people trying to sell (or wanting to buy) energy-efficient homes, but it’s also good for our society. It has been estimated almost half the homes that will be in use in 2050 have already been built. If we are to meaningfully reduce carbon emissions from our cities and built environment, we need to tackle our existing building stock.